Utah Reduces Homelessness by 91%…Is DC Increasing Homelessness?   Or Can DC  Use “Build First” or “Housing First”, Or Some Other Poor-People-Friendly Program To Work Along Side Gentrification? 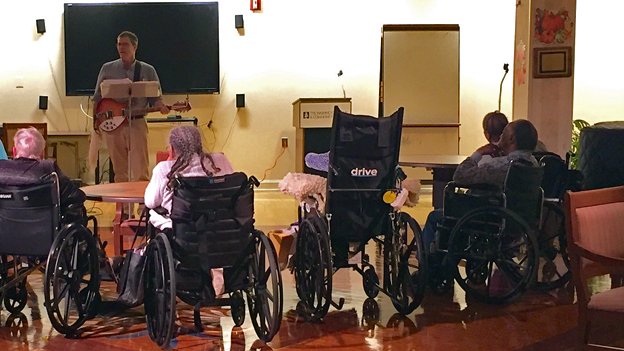 Matthew S. Schwartz
Washington Home residents enjoy evening entertainment at the home. They are all set to be relocated by the end of December 2016.
It was supposed to be a win-win transaction: By purchasing the Washington Home in Northwest Washington, Sidwell Friends could consolidate its campus for the first time in more than 50 years. The Washington Home could refocus its mission to provide in-home care to patients across the region, helping far more than the 127 mostly low-income residents who have been living at the senior facility.

What Sidwell didn’t count on was the strong negative response from some alumni, who wondered: Was the school living up to its Quaker values?

In September, a letter went out to Sidwell’s several thousand alumni, celebrating the “historic opportunity” to unify the campus. One person who received the letter was Judith Ingram, a member of the class of ’78. Something felt amiss to her.

“We got this letter and I found it disturbing and sort of filed it away in my head that this doesn’t sound right,” she says.

The one-page letter said nothing about what would happen to the more than 100 current residents of the Washington Home.

“I would expect more care, more concern from Sidwell. And I didn’t see it in the letter,” she says.

But to Larry Ottinger, another member of the class of ’78, the school should be taking a more hands-on approach.

“That sense of inquiry and responsibility, that was one of the things that concerned the alumni who know about this,” he says. 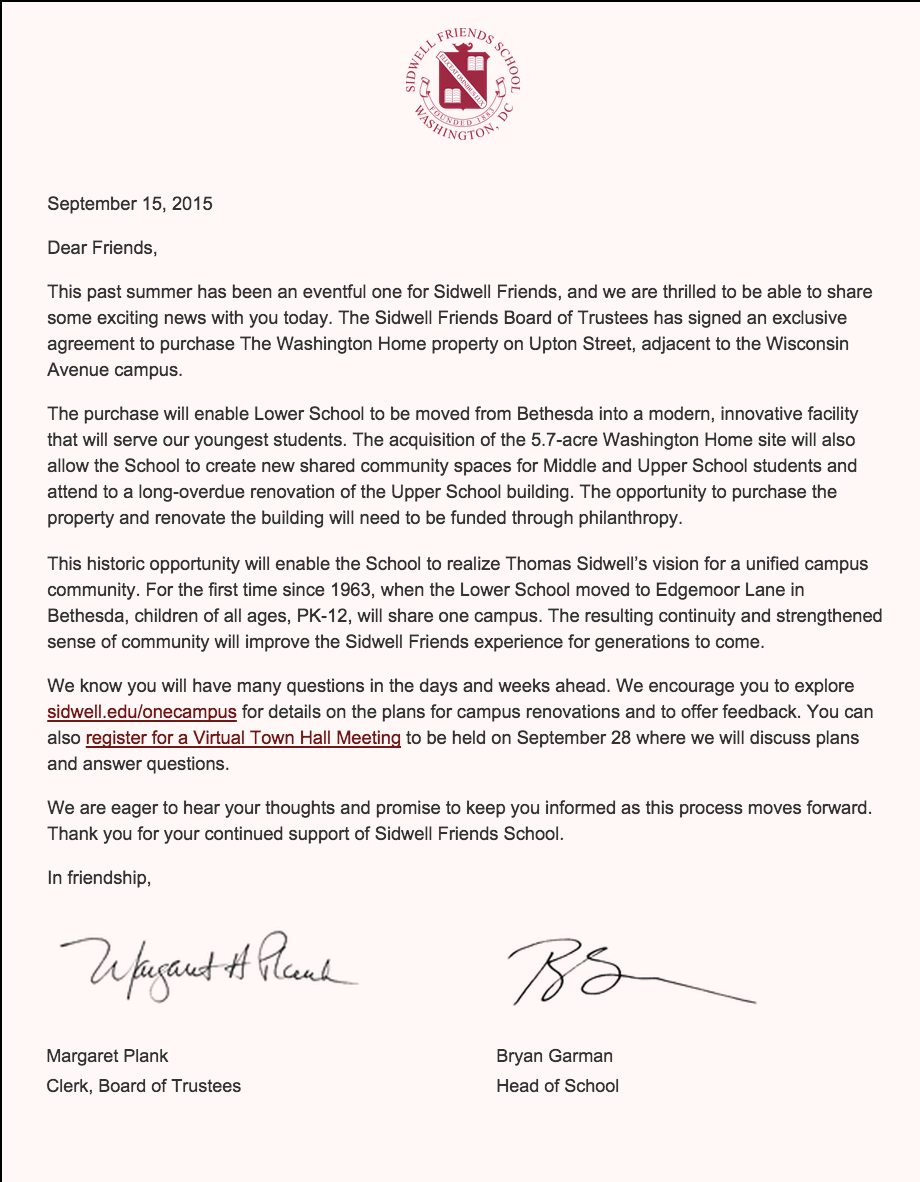 The letter sent to alumni of Sidwell Friends School.

Could Sidwell have done more?

A spirited discussion began among members of the Sidwell class of 1978. Was it okay for Sidwell to just assume that the Washington Home would be able to relocate the residents, without looking into it themselves? Ottinger and 16 other alumni drafted a letter of their own.

“What we wrote is that we believe that Sidwell has a moral responsibility, and a reputational interest, in proactively trying to make sure that the residents and families of the Washington Home would have the best transition possible,” Ottinger says.

Perhaps part of the $32.5 million Sidwell is spending to buy the Home could be set aside to help the families transition, Ottinger says. Perhaps, as a Quaker institution, they have a greater than normal responsibility to help those in need.

“Being at Sidwell, you got a constant education in ethics,” Ingram says. “It’s a reputation I think the school wears proudly. And I don’t think, and my classmates who signed this letter agree, we’re not showing our best Quaker face.”

Ivan Mayfield is co-chair of the Washington Home’s Family Council. Her 82-year-old mom has been here since 2009. On a recent Thursday evening, Mayfield introduced her mother to a reporter. Her mother glanced up, a peaceful smile on her face, but didn’t say anything, and soon looked away.

“She has long-term dementia,” Mayfield says.

The dementia unit at Washington Home is a secured facility, one of only four in the city. It helps keep her mom from wandering away, as she’s been known to do in the past. Once she wandered off on a cold December night, and police didn’t find her until eight hours later, trying to get into a home 20 blocks away.

After the Washington Home closes, that will leave only three locked units in the District, Mayfield said. Those will have to house not just all the displaced Washington Home residents, but all the future patients throughout the city that might need the services.

“There aren’t any spaces,” Mayfield says. “So what happens then?”

Residents at the Washington Home, most of whom are supported by Medicaid, enjoy high-quality facilities. This is the only nursing home in the area entirely consisting of private rooms — many of which will become Sidwell classrooms and offices. Mayfield doesn’t find that very moral.

“You have some of the most wealthiest in the community against the poorest of the community,” she says. “It’s the same thing that keeps happening again, over and over and over: People at the top taking away from the people at the bottom, who are seniors, who cannot help themselves, who cannot be their own advocates. Basically saying: Find somewhere else to live, because you can’t live here anymore.”

Washington Home CEO Tim Cox sympathizes with the residents, whom he was legally bound not to tell about the deal until it went through. But as far as he is concerned, Sidwell has acted in an exemplary manner.

“A lot of these private deals settle in 90 to 120 days because they need it for another purpose,” he says. That would have given the Home only two or three months to get everybody out. “So for us to be able to have 20 months ultimately” – 15 months until the December 2016 deadline, with an option to lease back the facilities for the next six months at $1 a month – “really was such a wonderful gift, and shows the care and the depth they had for us and for our residents.”

Sidwell has offered to help with the transition if the Washington Home needs it. Cox appreciates the offer, but doesn’t expect the Home will need much help.

“This is our business,” he says. “We know how to do this really well. We have a very competent team at the home, and they know what they’re doing to help transfer these people.”

Sidwell Friends officials say they had no reason not to trust that the Washington Home would take care of its residents.

“The board had deep and thoughtful conversations about this purchase — the implications for this purchase — over a period of several months, in which we took lots of views into consideration,” says Katie Smith Sloan, who sits on the school’s board of trustees.

But most of their discussion focused on the implications for the school and the surrounding neighborhood, she said — not whether this was best for the Home’s residents.

“The Washington Home assured us that there were plenty of opportunities to be placed elsewhere. So we took that on its face value.”

But that sentiment — that it’s incumbent on the Washington Home to take care of its own residents, that it’s not Sidwell’s responsibility — doesn’t sit well with everyone.

On Quaker values, and ‘exploiting others’

Quaker ethics are shaped in part by queries, deeply searching questions that Quakers ask themselves in worshipful settings, explains Stephen Angell, Leatherock Professor of Quaker Studies at the Earlham School of Religion in Richmond, Ind. Some queries that might be relevant to the situation at Sidwell include the question of caring for others, says Angell: “Do you respect that of God in every person?” he asks. “Do you avoid exploiting or manipulating others to accomplish ends, however worthy?”

Another relevant query might be one related to social justice, he says. “Are you concerned for those in our society who are disadvantaged?” he asks.

“Whether the Sidwell Friends School decision is the right one depends on how one answers these kinds of questions,” Angell explained via email. “Are the Washington Home residents being exploited or manipulated by others to accomplish ends however worthy? Are the residents of Washington Home disadvantaged and thus needing special concern? Is land or capital being used to further human exploitation?

“I can see where the concern arises, both among Friends and among a broader community,” Angell says. “I am not well acquainted with all of the particular issues in the Washington Home situation, but my personal answer might well be ‘yes’ to the questions in the immediately preceding paragraph.”

Aiken points to Sidwell’s website, which explains that Quakers believe there is “that of God” in each of us, that should shape everything one does. And given that Sidwell wants to pass its Quaker standards onto their students, they have even a greater obligation, Aiken says. “It’s almost an obligation, in this instance, for Sidwell Friends to go above and beyond the bare minimum of ethical requirements.”

It’s hard to say what holding themselves to a higher standard might look like, Aiken says. But at the very least, he thinks the affected residents of Washington Home should have their voices heard, and taken into account.

Not the right question?

Chris Davies thinks there’s another way to look at this ethical quandary. Davies is counsel for the school, an alumnus, and a parent of current students.

“The cost per patient, the cost per resident right now at the Washington Home is extremely high,” he says.

At a recent Advisory Neighborhood Committee meeting, Cox went over the numbers: Its nursing home facilities cost over $20 million last year to care for 323 people. Its in-home hospice services cost just $8 million to care for 1,000 people.

“So one might ask exactly the opposite question,” Davies says. “Is it ethical to put so many resources caring for one person when the Washington Home might conclude that it can better leverage its resources by altering the manner and method by which it provides care?”

But that sort of utilitarian calculation is contrary to Quaker values, says Ottinger, who signed onto the alumni letter.

“The issue is the respect for individuals,” Ottinger says. “You can’t start saying, ‘Well we’re going to help 100 people so we’re going to have 10 people who are collateral damage.’ …That is not the kind of approach, or mindset, that we’d be proud of.”

Sidwell Friends expects to have all campus renovations complete by the start of the 2019 school year.