Whites Often Excuse Their Enslavement of Africans By Saying,

Well, Africans Sold Africans Into Slavery…Is This The Same?

Are Black Republicans Selling Out Black People in 2018?

I say no! Because a few people acting in the interest of whites is in no way comparable to the world wide colonization process or the systematization of racism / white supremacy by whites.

And, wherever people are oppressed, there were/are numbers of the oppressed who collaborated with whites.

For example, there were Jews…the Jewish Ghetto Police who policed the Jews for the Nazis & the Judenrate which was responsible for the internal administration of Jewish ghettos for the Nazi’s.  Jewish author, Hannah Arendt says, “To the Jew, this role of the Jewish leaders in the destruction of their own people is undoubtedly the darkest chapter of the whole dark story.

Yet, no one ever says, well, Jews transported Jews to the gas chambers or exterminated Jews.

Since we’re talking about the oppressed who collaborate and collaborated with the white oppressor, let’s take a brief look at the history of this phenomena which was codified as an integral aspect of the colonization process with the purposeful creation of the ‘buffer group’.

We know that ship loads of white men circumnavigated the world subjugating the global Black and brown majority.  These men had babies by the local women which created a ‘buffer group’ of mixed or mulatto children.  This group inevitably, served as a buffer group between the white and Black populations.

Chancellor Williams in The Destruction of Black Civilization tells us that whereas “…in the US, all Africans and persons with any discernible African blood were legally classified as Negroes…[but in] other parts of the world where Mulattoes are either classified as white or given the legal status of a separate ethnic group with a privileged status above those with dark or black complexion.”

The privileges can include better education, jobs, and general living conditions.  And, ‘the function of the buffer group is to mirror back the desirability of white norms, values, beauty, and cultural activity’ (Roxann Wheeler, Complexion of Race).

Having been socialized to value the norms of the white oppressor group they act like the white oppressor group.  As, Dubois tells us, if we only learn and know white history and culture, you will think and act white (Dubois, 1960 speech Whither Now and Why).  The converse of that is, a Black person will only think/act Black if they learn/know African history and live African culture.

So, it’s those Blacks who’ve been acculturated, who have assimilated or who are bicultural, or who have not learned their history/culture who meet with Trump. 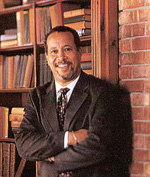